Using our signs for good

Our ability to broadcast advertising messages in the public space is a privilege, not a right.

Out of Home (OOH) advertising is ubiquitous amongst our urban environments, which is why the industry works hard to ensure it’s used for the benefit of the public. In 2020, it is estimated that the industry donated media space and advertising production valued at nearly $92 million and supported over 140 beneficiaries including charities, healthcare and environmental organisations, public bodies, and arts and cultural organisations.

Additionally, the OMA works closely with community groups and state and local government regulators to ensure that planning controls promote safe, high-quality signage and advertising, particularly in the context of new and emerging technologies.

Out of Home signs across Australia featured and profiled missing people as part of National Missing Persons Week (NMPW), from Sunday 1 August to Saturday 7 August 2021. The campaign aimed to help raise awareness of long-term missing Australians and the impact missingness has on their families.

The 2021 campaign marks the thirteenth year the Outdoor industry has sponsored NMPW in New South Wales, and the seventh year it has run nationally, in partnership with the Australian Federal Police (AFP). With more than $10 million of advertising space donated by OMA members over more than a decade, this campaign is the industry’s longest standing community partnership. Read the media release here.

The OMA and its members have announced an industry-wide partnership with Brisbane City Council (BCC) to pilot the delivery of Amber Alerts on outdoor signs. An amber alert is an important initiative that supports law enforcement in the urgent broadcasting and circulation of details about missing children or child abductions using digital signs.

The flexibility and immediacy of the wide network of digital signs makes the OOH industry perfectly positioned to broadcast community awareness messages and critical information.

The OOH industry tapped into a well-known fact: we pass down more than just our looks to our children.

This joint industry campaign, in partnership with DrinkWise, brings the message to life by encouraging adult Australians to think about how they consume alcohol, especially in front of their children. The OMA is working with DrinkWise to roll out this campaign over three years.

Read more about the campaign.

The OOH industry in Australia joined a global partnership between the National Geographic Society and OOH industry bodies across 20 countries to support the Photo Ark project.

Combining the power of photography and the impact of the OOH channel, awareness was raised for animal species at risk of extinction. The international campaign was launched in Australia on Endangered Species Day, 18 May. Powerful images ran across digital signs in NSW, QLD, SA, VIC and WA, raising awareness about animal populations in decline all over the world. Its aim was to inspire people to learn how to help protect them.

The National Geographic Photo Ark, led by photographer Joel Sartore, is a multi-year endeavour to document every species living in zoos and wildlife sanctuaries. It aims to encourage action through education, and to help save wildlife by supporting on-the-ground conservation efforts.

To date, Sartore has documented 8,000 species, putting him two-thirds of the way toward completing the Photo Ark, which he estimates will include portraits of more than 12,000 species. 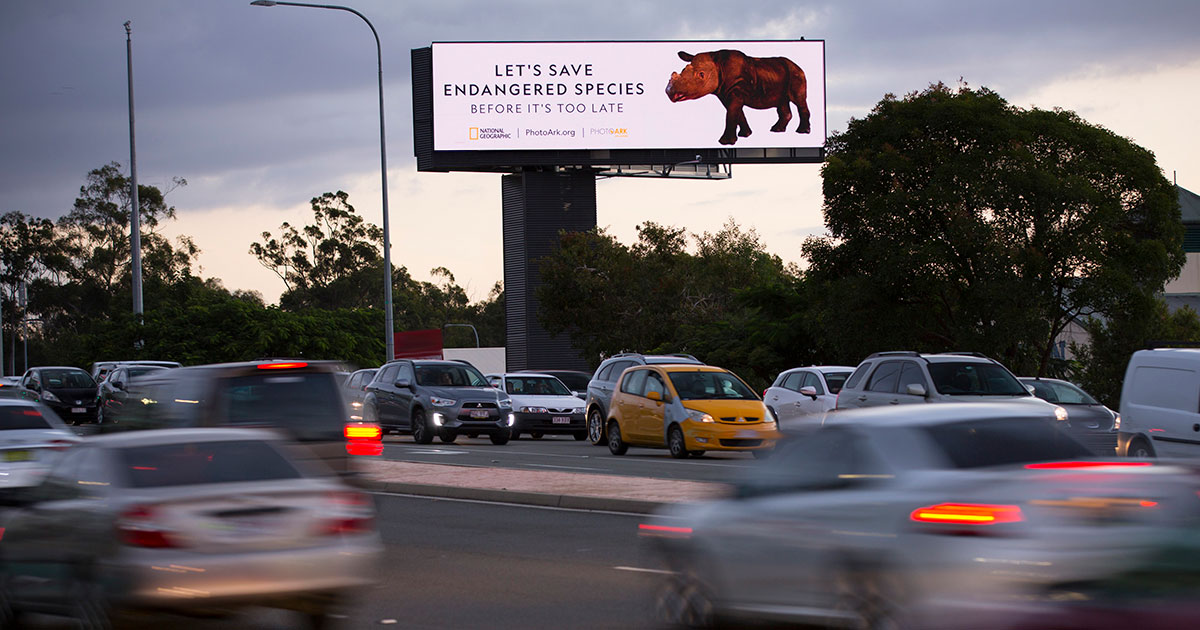